By Scott Grubbe | Uncategorized | No Comments

Click this link for a summary of the stress test rule changes coming January 1, 2018: Understanding the rule changes Jan 1 2018

The short and sweet:

In My Humble Opinion…

Questions?  Call me, I would love to help you build a mortgage plan.

The Finance Minister Bill Moreau announced yesterday a big change to the mortgage qualifying rules, in an attempt to address concerns that Canadians are over extending themselves financially.

Here are the key points:

Who this will effect:

Read more at globe and mail…

Members of the Canadian Home Builders Association in Alberta indicated this month that 2016 will likely be the bottom of the new home build slow down.

How Your Closing Date Effects The Mortgage…

There are a few ways the closing date picked can effect the mortgage:1) Quick Close Specials.  Some banks offer quick close specials, and different rates depending on how far out the closing date is.  If the closing date is within 30 to 45 days, the client may be able to get 0.05% off their rate.  Not a huge discount, but worth knowing about!2) Monthly Payment Date.Most banks these days will simply set the payment date on the same day as the closing day.  So if you closed on August 9th, your first payment will come out September 9th.  You can move the date forward (i.e. to September 1st), but it will be a full payment (not an interest only payment or interest adjustment payment).3) Enough Time To Get Everything Done.Of course, the flip side, is that the bank needs enough time to get the mortgage properly reviewed and approved.  Home inspection, Appraisal (if needed), and legal work all needs to be done.  3 weeks is tight to get it done, but sufficient.The sweet spot is 3 weeks to 6 weeks from the date the offer is written.

Disagree?  Leave me a comment, I’d love to hear from you.

That’s nice… what does that mean?

So… if a client wants a variable rate, Line of Credit, 1, 2, 3, or 4 year rate, they have to be able to afford a mortgage at 4.74%.  The idea is to qualify them at a higher rate, so they can still afford their mortgage if rates increase in the next 5 years.

The 5 year fixed rate mortgages can be qualified using the actual rate that the client will be getting (i.e. 2.49%).  5 years out is far enough that they assume there will be some career advancement, savings, mortgage pay down, etc to offset any rate increase.

On the typical $330,000 mortgage, the test rate increase will increase the “test” monthly mortgage payment by about $19.  The GDS and TDS will increase by less than 0.5%.

The impact on qualifying will be minimal, but it is an interesting tweak by the Bank of Canada to say that they are concerned about the markets in Vancouver and Toronto.

It’s a great time to buy in Calgary!

Ownership of the average home in calgary, costs the average family 31.5% of their gross household income.  The graph below shows that Calgary is more affordable now than the historical average (the dotted line at 39.8%).  It’s a great time to buy! 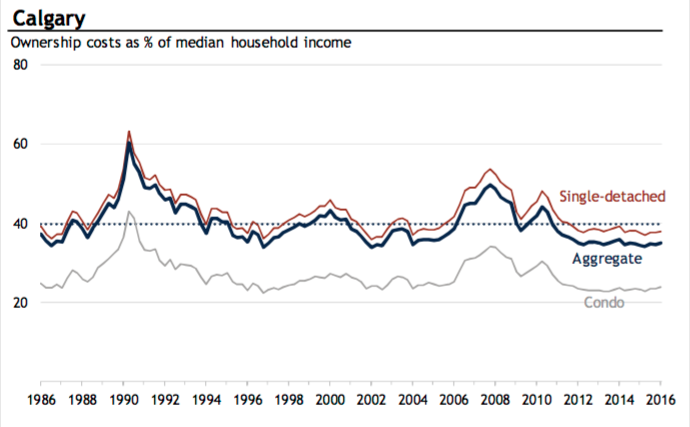 The Toronto housing costs have risen to 60.6% of the average gross household income, surpassing their historical average of 47.8%. 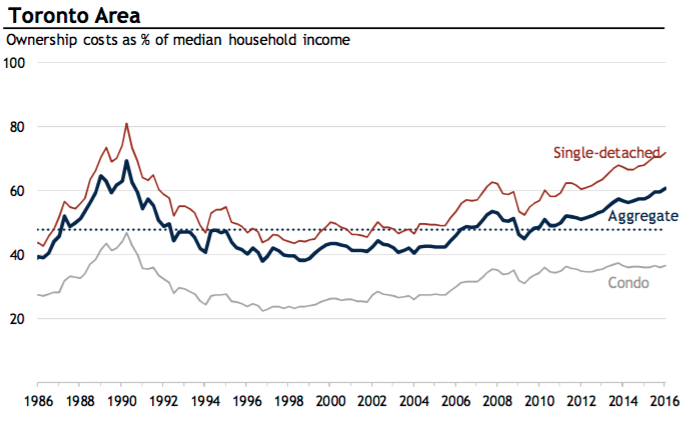 The Vancouver housing costs have also risen.  They are now unto 87.6% of the average gross household income, surpassing their historical average of 59.2%.

The Financial Benefits Of Home Ownership

The I Just Got Laid Off Mortgage

The I Just Got Laid Off Mortgage

Alternative lenders are very useful when a client needs to fill a gap that the banks don’t want to touch.  They like clients who are new to being self employed, or have bruised credit that needs to be repaired.

One alternative lender has started to fill the gap for salaried employees that have been laid off due to the downturn in the economy.  This mortgage can be set up so the borrower doesn’t have to make any payments for a year.  The mortgage depends on reasonable equity (down payment) and reasonable grounds that full time gainful employment could be found within a year.  Each deal is assessed on it’s own merit.

This could be a deal saver for people with an accepted offer on a house, or people who need to re-finance and avoid falling behind on bills.

Alberta’s unemployment rate jumped from 7.2% to 7.8% in May due to the Fort McMurray fires.  Ontario and Quebec each posted strong job gains in May (21,600), offsetting the effects of Alberta’s drop on the overall Canadian Unemployment rate.  Calgary unemployment dropped a touch from 8.3% to 8.1%.

Todd Hirsch, chief economist at ATB, is optimistic that we may have reached the bottom of the recession in Alberta, as oil prices have become more stable lately.  He recently speculated that this should contribute to improving Alberta’s unemployment rates in the coming months.

*Monoline lenders are lenders that deal only in mortgages. They don’t sell RRSPs, or checking accounts etc.  Mono = 1.

**These rates are generally competitive rates to give you a feel for where the market is at.  Contact me for quick close deals and rate specials!

So… first off, I didn’t get this out yesterday because our family was distracted by puppies!  We put a deposit down on a 3 week old miniature schnauzer, scheduled to come home with us mid July.  Our 9 year old schnauzer is going to be a step mom!

And now… back to our regularly scheduled program…

While the broker channel lost a little market share in the first time home buyers market, it gained some ground with customers in their subsequent mortgage dealings.

Personally, I am optimistic that as the mortgage broker industry matures, we will continue to see increased market share as clients become loyal to brokers and broker brands instead of banks.

*Monoline lenders are lenders that deal only in mortgages. They don’t sell RRSPs, or checking accounts etc.  Mono = 1.

**These rates are generally competitive rates to give you a feel for where the market is at.  Contact me for quick close deals and rate specials!

“A good friend pours water on the fire of our fears, and throws gasoline on the passions of our dreams.”

I am Scott Grubbe. I can help you understand what you qualify for, and what mortgage features will help you accomplish your goals.

Fresh from the Blog